Barbara King
Barbara King
Works > Decorations Series: Installations, Paintings, Mixed Media
The Decorations series began in 1989. I was watching the Iran-Contra hearings on television, and noticed the medals on the uniform of Marine Corps lieutenant colonel, Oliver North. North was charged with running covert military operations, and I questioned the meaning of his medals, and the meaning of heroism. I also thought the medals resembled tiny minimalist paintings and wondered how they would be perceived in an art context. First I created mixed media pieces and then installations. In 2006, during the Iraq and Afghanistan wars, I reworked the installation and updated US medals for these wars. I also created medals to call attention to various issues like the increased presence of women in the military.  For Saint Peter's Church, the installation was specifically designed for the Narthex Gallery, and incorporated political issues in 2009. New medals were made to reflect the ongoing wars in Iraq and Afghanistan, and others for the historic Presidential election of Barack Obama. 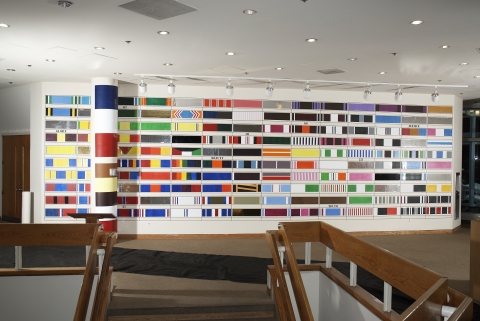